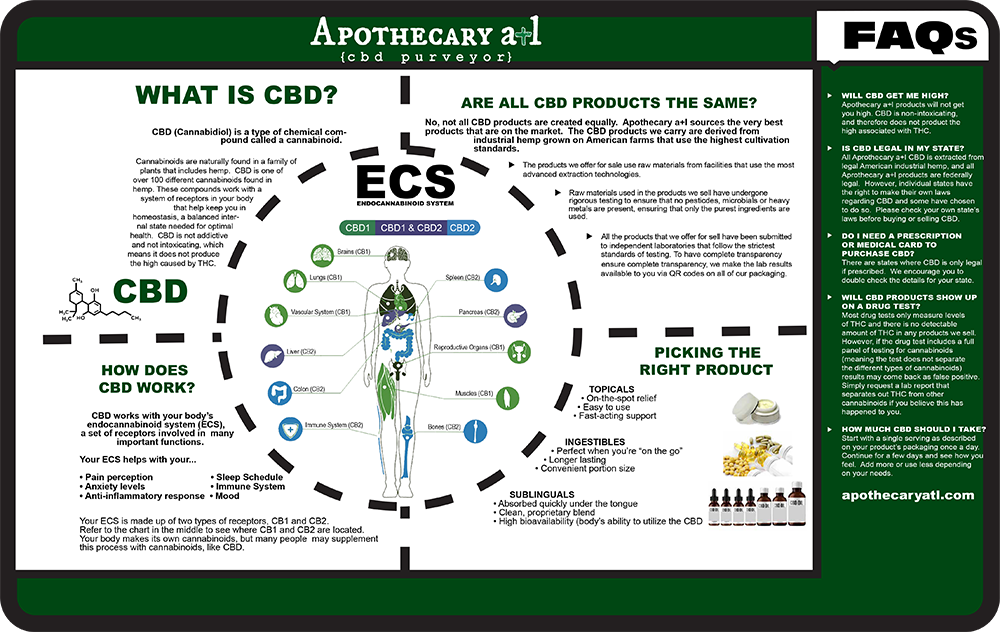 Full spectrum means that an oil or product contains all the cannabinoids that are naturally occurring in the cannabis plant. Quality full spectrum CBD products are typically high in CBD, with only trace amounts of minor cannabinoids, and very low in THC (less than 0.3%). Despite these relatively low amounts, the overall composition is considered “full spectrum” and is synonymous with the “entourage effect” – which refers to the increased effectiveness of these products due to the different cannabinoids working synergistically. Full spectrum products are commonly considered more effective than products that are CBD isolate derived. Products that are isolate derived will only contain the isolated CBD molecule.

Broad spectrum CBD products are identical to full spectrum except they are 100% THC free.

These terms often surface casually in conversations pertaining to CBD and its various forms. What’s the difference? Isolate, refers to pure CBD, and distillate is a Broad Spectrum distillation after THC has been removed.

WHAT ABOUT CBD ISOLATE PRODUCTS?

Everything about Full Spectrum

So, what else are you getting with a full spectrum product besides CBD? The short answer is you are getting more than 100 different cannabinoids found in the hemp plant. CBD and THC are the most abundant cannabinoids in cannabis, but there are several minor cannabinoids that can play an important role in the effectiveness of a CBD product. Here is a list of their names and the role studies suggest they play in the human body.

CBD is the most abundant compound in the hemp plant. Unlike THC, CBD will not give the user a “high” feeling that the cannabis plant has been traditionally known for. It is used by consumers to promote a healthy functioning system. Some people report it has a relaxing with calming effect, while others may feel more energized.

THC is the second most common cannabinoid in the hemp plant. It is also the most desired compound in hemp’s sister plant, marijuana. THC is the compound in the cannabis plant that makes the user feel “high”. Legally, the distinction between hemp and marijuana is the THC content of the plant. Anything less than 0.3% is defined as hemp, and anything over 0.3% is marijuana. While full spectrum CBD products will contain trace amount of THC, levels will always be below the 0.3% mark. In such small amounts, consumers using CBD products will not feel the psychoactive effects of the THC, it is only present to help increase the entourage effect.

CBG is a non-intoxicating cannabinoid just like CBD. It is actually the parent compound of THC and CBD, and acts as precursor to the three main cannabinoid lines: tetrahydrocannabinolic acid (THCA), cannabidiolic acid (CBDA), and cannabichromenic acid (CBCA). Enzymes in the cannabis plant will break down CBG and convert it to one of these final compounds.

CBN is a minor cannabinoid that is being studied for its sedative effects. CBN is believed to be the compound in cannabis that generates a relaxed feeling in the user.

Cannabichromene (CBC), is one of the hundreds of cannabinoids found in the Cannabis plant, and is therefore a phytocannabinoid. It bears structural similarity to the other natural cannabinoids, including THC,THCV, CBD, CBN, among others. CBC and its derivatives are as abundant as cannabinols in cannabis.

Broad-spectrum CBD products are made with a broad range of cannabinoids and other beneficial compounds found in hemp plants, but with essentially no THC.

Full-spectrum CBD products are made with the full range of cannabinoids and other beneficial compounds found in hemp plants, including up to 0.3% THC (the federally legal limit). Don't worry, this small amount of THC is not enough to cause a "high."

CBD, or cannabidiol, is a compound found primarily in the flowers and leaves of the hemp plant. It’s one of many powerful cannabinoids found in hemp, and is known for supporting body and mind in various ways.

By using our website, you agree to the use of cookies. These cookies help us understand how customers arrive at and use our site and help us make improvements. Hide this message More on cookies »